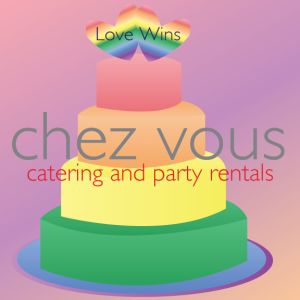 Chez Vous has always been a supporter of the LGBTQIPA community. We take pride in the weddings we have been able to cater over the years for members of the community and look forward to catering many more.

We are excited to announce that after a forty six year struggle, Marriage Equality has finally passed! In a five to four vote, Justice Anthony Kennedy wrote for the majority with the four liberal justices, as each of the four conservative justices wrote their dissent. The language of Kennedy’s opinion spoke eloquently of the most fundamental values of family, love and liberty. “No union is more profound than marriage, for it embodies the highest ideals of love, fidelity, devotion, sacrifice and family,” Kennedy wrote.

“In forming a marital union, two people become something greater than they once were.” “Their hope,” Kennedy wrote, “is not to be condemned to live in loneliness, excluded from one of civilization’s oldest institutions. They ask for equal dignity in the eyes of the law. The Constitution grants them that right.” The U.S. is now the 21st country to legalize same-sex marriage nationwide, including territories.

Married same-sex couples will now enjoy the same legal rights and benefits as married heterosexual couples nationwide and will be recognized on official documents such as birth and death certificates. Hundreds of supports of the Marriage Equality movement have flooded the plaza and sidewalk of the Court since the ruling in celebrating their right to marry who they love.

Chez Vous Catering is happy to share in celebration with the LGBTQIPA community and its supporters. We are beyond excited to say that love finally wins. That being said, if you or a friend are getting married, please let us know, Chez Vous would love to cater for your special day.