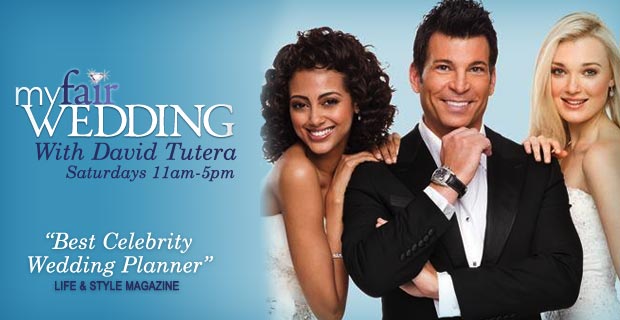 On a recent episode, Chez Vous was featured as My Fair Wedding Catering Company for the wedding of Dwayne and Nicole.

In the below clip from My Fair Wedding, Chez Vous’ Chef Louis and David Tutera discuss the appetizers prepared by chez vous for the occasion:

My Fair wedding is a reality television show on WE tv, starring David Tutera. Since premiering in 2008, the show has been helping brides-to-be plan their dream wedding. In an early review, The New York Daily News described how the Tutera’s taste and skill-set explain the show’s success:

David Tutera didn’t get to be “wedding planner to the stars” without skills that go beyond picking the right flowers for the guest tables.

In My Fair Wedding, a new show where Tutera guides ordinary people to a better wedding experience, he demonstrates a level of verbal dexterity that would make Oprah seem tongue-tied.

Some information about Chez Vous Catering

Chez Vous Caterers one of New York’s most exclusive off premise caterers is proud to add the Historic Edgewater Hall and Shandelee Lake Inn to its extensive list of available party sites.

Edgewater Hall, with its colorful historic background and landmark status, is an exclusive location for Chez Vous clients. Built in 1876, Edgewater Hall is located at 691 Bay Street. It was built as the original location of Staten Island Savings Bank and was later used as a speakeasy frequented by the Vanderbilts and Barrymores during the prohibition era.

If you’re interested in having Chez Vous cater your event, call (718) 720-0900 or  fill out the contact form below and one of our representatives will get back to you as soon as possible: